Although the ancient European art of “Pisanki” has become very closely associated with Easter, it first came about more than 2000 years ago when people realized the connection between the egg and spring.  After the dark, cold, and death of winter, the egg symbolized rebirth or hope. Even then certain people used wax and natural dyes to decorate the eggs with meaningful symbols. There is also an old legend that says that every pisanki egg made will reinforce the chain that holds an old evil monster in the bowels of the earth.

Pisanki (Pisanky, pysanky) are colored and decorated Easter eggs. The art of pisanki is cultivated in Poland, Ukraine, Lithuania and many other East and Central European countries. The name pisanki comes from the word “pisac” means “to write” or “to print”. Easter eggs are in Polish called jajka wielkanocne.

Easter Eggs are the symbols of life and they were believed to have magical properties. These beliefs were originally associated with an old pagan tradition which gradually faded out, so that Easter eggs became incorporated to the Christian tradition of Easter. The oldest painted eggs found in Poland originated from the X century. Read several articles about Polish pagan and Easter traditions and habits in Poland.

There are several techniques to make pisanki. Pisanki from different regions of Poland can be distinguished by the unique patters. The most common decorating technique is so called wax-flowing or wax-melting. Special kits for painting eggs with a funneled pen, color dyes and a wax can be purchased in Ukrainian or Polish gift shops.

The wax-melting technique of painting is very complex and consist of several stages. First the pattern is painted by use of the funelled pen filled with the melted wax, later the egg is dipped in the selected color and so and so again until the painting is done in all chosen colors starting from the lightest and finish with the darkest. The final and very important step is a removing of the wax from the egg.

The “chicken and rooster” were symbols of fertility and grain symbolized plenty or good harvest. The much-loved sun that gave light and life was often shown on the egg and so was a green bough or bloom.

They used onion skins, buckwheat husks, campion, bark of the wild apple and the flower of the lilac for yellow. For red they used cochinel (a female scale insect), deer horn, sandlewood, or beets. Green came from sunflower seeds and berries of the wild alder. Sometimes hollyhock blooms were used for certain shades, as well as various other blooms, leaves and moss. Today, we buy our dyes for the most part, although one time we tried onion skins, beets and some berries. 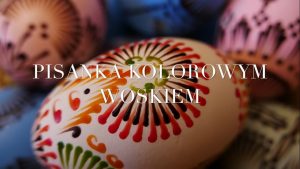 A thousand years later, when much of Eastern Europe had embraced Christianity, the eggs were still made and considered to be a Lenten project in Poland. They were often made with Easter symbols, as well as some of the natural ones. The sun became the symbol for rebirth.

Words may be written or designs drawn on the egg with a stylus and·bee’s wax. Then, the egg is dipped in a light color, usually yellow dye and allowed to dry. The wax is then used to write or cover that which will be yellow in the decorated egg. I like to cover a lot of yellow so that the egg is bright and colorful. After this step, I dip the egg in orange and then in red, of course covering each color with some design made in wax.

Choose a clean, hard raw egg that has no cracks in it. If it is from the store, you might want to dip it in a quart of water in which a tablespoon of vinegar has been added. Blot dry, never rub. (I have chickens so I try to gather some fresh eggs to use when I can).

The writing tool or kistka usually has a funnel on the end. It is held in a flame to become hot enough to melt the wax. Some people like to scoop small amounts into the funnel, others prefer to put the hot tip on the wax and allow it to siphon. Either way works, but it is important to keep the wax hot, but not so over-heated that it drips or runs out too fast. Practice will give you the proper feel for this procedure. Once the final step is completed and most of the color is covered, the egg may be dipped in black or some other dark color. Then, when it is dry, the wax may be melted off by holding the egg off to the side of the flame until it slides off. I wipe at this point with a soft rag or tissue. The finished egg must be kept at least at room temperature to varnish so that it shines. Allow several hours for the varnished egg to dry.

Pisanki are given in love. Young people used to make one for their beloved. Family members and friends would exchange one with the traditional three kisses after the Easter Mass. The new Pisanki made each Lent would be taken to the church for the blessing when the food basket of Easter food was blessed on Easter Saturday.

Remember that the raw egg dries and the eggs keep as long as they are not damaged or cracked. I have two that are more than 50 years old. They sit in a china cabinet behind glass.

History of East Eggs in Poland

Easter eggs are symbols of fertility and beginning of the new life. Some of the eggs were painted in traditional Polish folk patterns. The word “pisanki” comes from the root-word meaning “to write”. Painting eggs is a multi-layered process of writing on an egg with hot beeswax, dying the egg, then finally melting and rubbing off the egg for a finished product. The eggs are used during Easter not only because of their symbolic sense but also because of practical reasons. Simply, the chicken lay more eggs in spring season, it is a symbol of good harvest and fertility.

On Holy Saturday Poles take their baskets of food to the church to be blessed: eggs (painted, of course), sausage, ham, bread and anything else, including salt and pepper. The basket is nicely decorated with doily, green parsley and flowers. The baskets are put at the altar and priest bless the food. This should ensure a good harvest and sufficient amount of food for coming year.
The famous Polish epic poem “Chlopi” (Peasants) written by Wladyslaw Reymont that awarded him a Nobel Prize in 1924 is divided into 4 volumes based on seasons of the year and describes how tightly the life of the farmers was connected to the nature and the specific season.