Krakow, one of Europe’s most beautiful cities, is waiting to be discovered. Its fabulous Old Town is one of the finest of its kind in the world, and its unquestionable charm has been one of the best-kept secrets among both travelers and residents. Krakow has a great range of hotels, restaurants, cafes and shops that add their own unique style to the city, and a whole host of interesting spots to visit within walking distance. It’s high time visit Krakow and discover its magic.

Krakow is situated in southern Poland, it is one of the Poland’s most ancient cities and its former capital and a real pearl in its crown. Krakow lies on the banks of the Vistula River which is called the Queen of Polish Rivers. The city receives visitors from the whole world.

The town is filled with monuments and is impossible to visit in just one day which is not really enough to experience the emotions this city can evoke. Its unique atmosphere has inspired artists and writers. Visitors fall in love with Krakow and if they leave, then it is only to return another day The city’s rich cultural and artistic life contributes to this fascination as much as the genuine character of its streets and little squares lined with restaurants serving local delicacies. Krakow is also famous for its fantastic restaurants and clubs.

The city on the Vistula River, for five centuries the capital of Poland, has accumulated one fourth of Poland’s total number of museum artefacts. A visit to Krakow is a meeting with the most glorious era in our history. Krakow’s Old Town with Wawel and the Kazimierz district were placed on the first World Heritage List, created by the UNESCO in 1978. It should be remembered that this prestigious recognition had then been awarded to the most famous world heritage sites.

The historic architecture and medieval urban layout have survived in the surrounds of the Main Market Square. Many architectural landmarks that recall the ancient past now house smart shops, elegant restaurants and cafes, which make sightseeing in the old town a real pleasure.

The Wawel Hill was the centre of the Wislanie state before the state of Poland was established. The Piast dynastv settled here no earlier than the late 10th c. The first king to have his coronation at Wawel was Ladislaus the Elbow-High in 1320. According to archaeologists, in the Middle Ages there were as many as seven Gothic churches on the hill and numerous other buildings, which were later destroyed. The Rotunda of SS Felix and Adauctus and Romanesque elements of cathedral vaults are believed to be the oldest landmark on the hill (ca. 950). Elements of old structures are displayed at the exhibition “Wawel which is no more”, along with a computer presentation.

The Wawel Castle, several times redesigned throughout the centuries, is a combination of the Gothic and the Renaissance styles. The royal residence was designed by such masters as Franciszek of Florence and Bartolomeo Berrecci, who, when his work was completed, placed the following inscription over the entrance gate Si Deus nobiscum quis contra nos (If God is with us, who will be against us?) Four exhibitions are open for visitors – The Royal Chambers, the Royal Apartments, The Treasury and the Armoury and Orient in Wawel collections. One can also visit the towers. 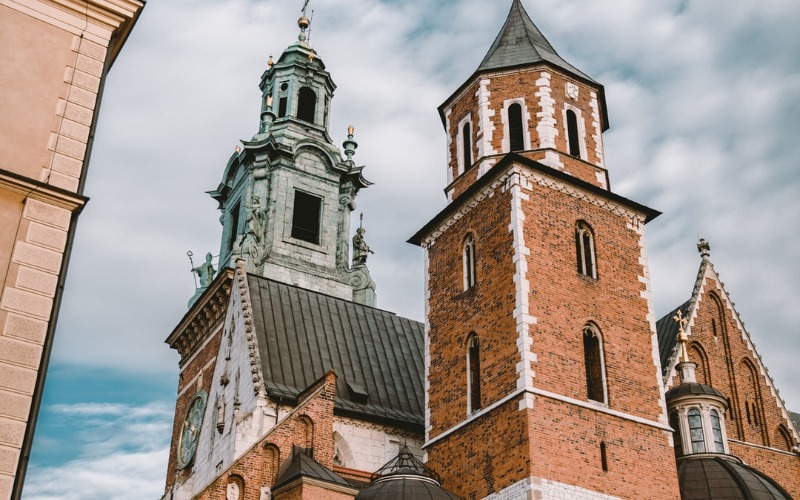 One of the finest rooms in the castle is the Room of the Envoys, also known as “Under the Heads”, as its ceiling contains cassetons with sculpted heads (16th c.) The largest is the Senator’s Room in which Senate meetings, court ceremonies and balls were held. Also worth a visit are the Royal Treasury (with the royal coronation sword) and the Armoury with its rich collection of weapons. The jewels of Wawel are its Arras tapestries woven from wool, silk and metallic thread in Brussels workshops. They were commissioned by King Sigismund Augustus. 138 tapestries out of 360 have survived in this collection, ranked among the largest in Europe.

The Wawel Cathedral represents an array of epochs and styles – the Gothic structure is surrounded with twenty one chapels – Gothic, Renaissance, and Baroque. In its majestic, dark interior the royal sarcophagi, and the silver confession of St. Stanislaus, early-Renaissance stalls and the beautiful black crucifix of Queen Jadwiga. Thirty seven royal coronations took place at the cathedral. Almost all Polish kings found a place of final rest here – from Ladislaus the Elbow-High to August II. T. Kosciuszko, J. Pilsudski, W. Sikorski, A. Mickiewicz and Slowacki are also buried in the cathedral crypts. Among the chapels, the most beautiful is the Zygmuntowska (Sigismund’s) Chapel, a real masterpiece of the Renaissance. It is also worth to take an effort to climb the Sigismund Tower, to see the famous Sigismund, a huge bell, cast in the 16th c. from cannons, weighing 12.7 tonnes. Twelve people are needed to put it in motion. Its voice is heard from a distance of 12 km. In 2000 its heart broke. The new heart, weighing 350 kg, was cast and hung after a few months.

It is the largest medieval square in Europe (approx. 200×200 m). It was laid out when the city received its charter in 1257. The Churches of St. Mary’s and St. Adalbert were built earlier, and thus they are not aligned with the sides of the Main Market Square. The Cloth Hall, the Town Hall and numerous townhouses were built later The most recent addition is the monument of Adam Mickiewicz – today it is the most popular meeting place for young people. Looking at the restored colourful townhouses and mansions surrounding the square it is hard to believe that they are 500-600 years’ old. The Grey House at no. 6 deserves a closer look. Legend has it that it was donated by King Casimir the Great to his mistress, Sarah. The Pod Krzysztofory Palace is also noteworthy as kings John Casimir, Michal Korybut Wisniowiecki and Prince Jozef Poniatowski once stayed there. Today it houses the Krakow’s Historical Museum.

The origins of the Cloth Hall go back to the 13th c., but at that time it was just a double range of cloth trade stalls. They differed from other trade facilities at the Main Market Square only because of their size. In the 14th c. the merchants built a 108-metre long hall, which two centuries later was reconstructed after a fire as an impressive Renaissance building with a parapet adorned by mascarons. The Cloth Hall acquired its current appearance in the 19th c. when the neo-Gothic arcades were added. Continues a centuries-old tradition, trade still flourishes in the stylish stalls of the Cloth Hall. Merchant and guild emblems may be seen on the walls, along with the armorial bearings of Polish cities.

The church, founded by Krakow burghers in the 13th c., is one of the finest Gothic parish churches in Poland. Its interior captivates the viewer with its outstanding polychromies by Jan Matejko, as well as by its stained-glass windows, both 14th-century and those designed by S. Wyspiahski and J. Matejko. One should take a glance at the epitaphs of prominent families and take a seat in the wooden Baroque stalls, centuries ago reserved for the City of Krakow’s councillors and magnates. But the real jewel of the basilica is its high-altar, the work of Wit Stwosz (Veit Stoss). It is 13 metres high and 11 metres wide and is the largest medieval wooden altar in the entire Europe. It took 12 years for the Master to complete his work. 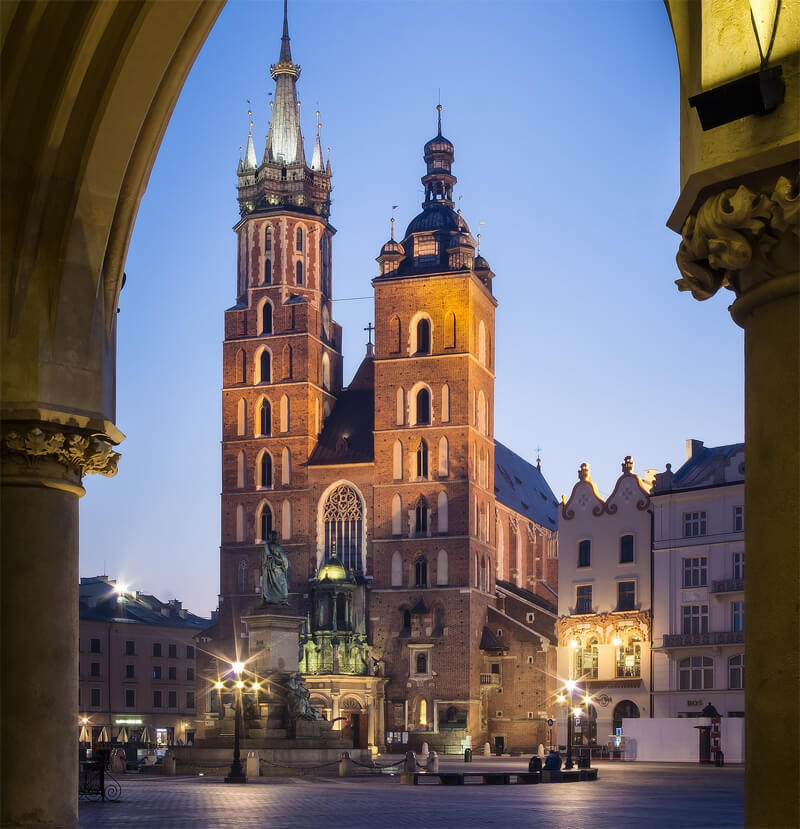 The altar consists of 200 figures, from as small as 3 cm to as high as 3 m; they were carved with great precision revealing all anatomical details. The central scene depicts the Dormition of Our Lady; bas-reliefs on side wings illustrate scenes from the New Testament. From the higher of the two towers of the church (81m), a bugle is played every hour. Behind the basilica are the small Mariacki Square (on the site of a former parish graveyard used until the 19th c.), and the charming St Barbara’s Church dating from the 14thc. (once a funeral chapel).

This Romanesque church is one of the oldest historical buildings in Krakow; its origins date back to the 10th c., although its present appearance is the result of the reconstruction in the 17th c. Legend has it that the church was built on the site at which St. Adalbert gave sermons. In 1241 the Cracovians found shelter there during the Mogul invasion of Batu-Khan’s army. Several steps down lead us to the interior of the church, as the ground level is now higher than during the Middle Ages. Once inside, one should not miss a look at the figure of Christ crucified on the rood-screen. The crypt houses an exhibition on the history of Krakow’s Main Market Square, where one can see wooden water pipes dating from the 15th-16th centuries.

The brick tower is the only surviving part of the Krakow Town Hall which was built in the 14th c. Badly dilapidated, the Town Hall was demolished in the early 19th c. The tower is 70 metres high. The entrance on the side of the Cloth Hall is guarded by two stone lions. The Tower houses a section of the Historical Museum; the vaults offer a venue for the Town Hall Stage, It is worth to take the effort to climb the tower to admire an impressive panorama of the Old Town. On the Square, between the Town Hall Tower and the outlet of Szewska Street one can see a commemorative plaque, at the site where in 1794 Tadeusz Kosciuszko took the oath as the leader of the nation.

Wieliczka is a small town near Krakow and famous for one of the oldest guild of the salt miners and salt industry institution in Europe. Salt Mine Wieliczka is situated on 9 levels and over 3000 thousand chambers reaching 327m deep. Among the parts of museum, exhibitions available for tourists are galleries and underground halls, magnificent chapels, salt lakes, original medieval tools and equipment and several salt carvings and murals. Salt Mine Wieliczka was entered to the National Monuments Registry and included in Unesco’s 1st World List of Cultural and Natural Heritage. Recently, it has been acknowledged as the National History Monument.

The range of accommodation and gastronomic services is very wide and easily available, which makes planning a trip to Krakow very straightforward. It is also a base from where to visit southern Poland. Zakopane, called “the mountain capital” of Poland and Wroclaw are within easy distance from Krakow.

BUSES
The bus system around the city is well developed. Buses may sometimes be crowded but they are safe and punctual. Take a look at the bus routes at the bus stops when looking for your bus. On the timetable the first column is bus arrival time on weekdays, the second column gives times of arrival at weekends and holidays. A list of bus stops is also given. Make sure you know the direction you want to go. The destination of the bus is displayed at the front of the bus.

TRAMS
There are day trams operating approximately between 4 a.m. till 11 p.m. The tram route schedule is exactly the same as the bus. The tram is a quicker means of transport during the rush hour.

TAXI
Always use official taxi operators with official fares. Official taxi corporations have their logo and phone number on the top of the taxi and the tariff on the passenger window. An official license must be visible inside the taxi. You can always phone for a taxi (there is a problem with language and your location – however there is no charge for finding you).

TICKETS
The general rule here is – one trip, one ticket. If you are staying in the city for some time there are other options, e.g. day, week or month tickets. Validate your ticket immediately when entering the bus/tram.